God, even though I'm not the brightest, or the smartest, or the best at what I do, and I totally lost sight of what was important along the way and still feel like I messed up my time at school, thank you for giving me the strength to make it through each day. Even though I am not worthy, thank you for giving me such a blessed life with a few good friends, and for such loving and supportful parents. I don't deserve to be so lucky.
Posted by WuSH at 7:26 AM No comments:

The feeling that won't go away... 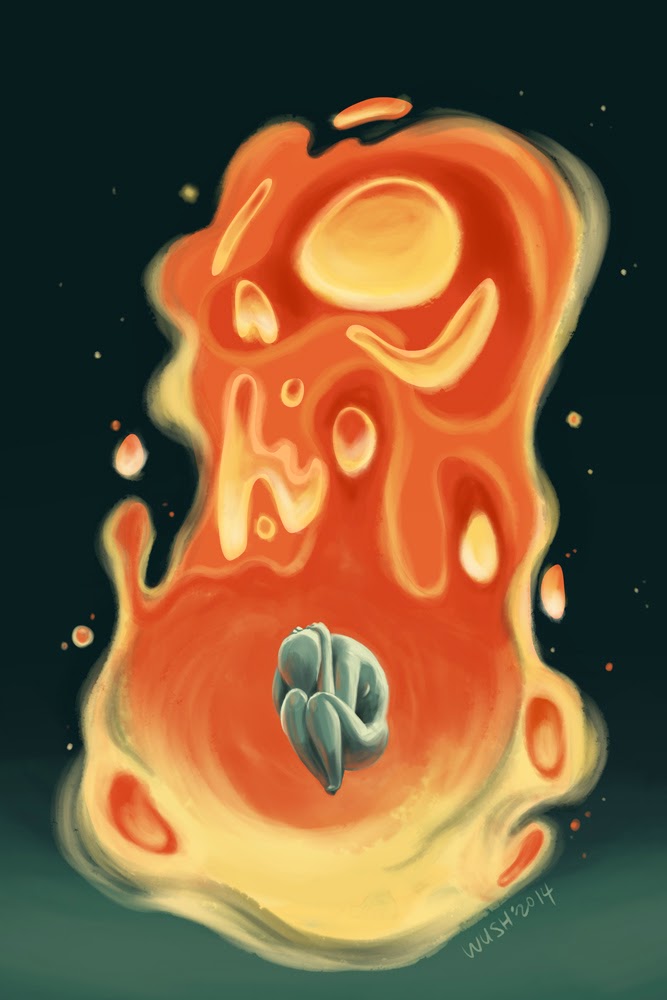 It's a whole bunch of things, but let's just say it's a bad headache that won't go away.

On a brighter note, I had fun messing with Kyle's Brushes. Mainly used the oil set. I need to paint more...

Posted by WuSH at 3:02 AM No comments:
Labels: digital, personal work

As a little note for some stuff that I had been sending out, I was drawing these rabbits... and then it occurred to me, I might as well make a stamp so I don't have to keep drawing the same thing over and over.. (and I do draw rather slow.) 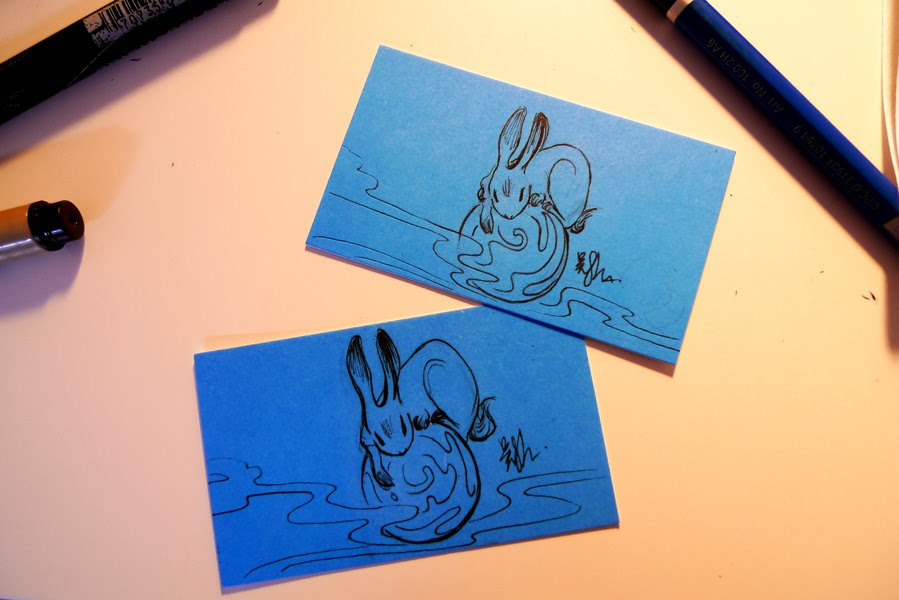 I do admit, I have an obsession for rabbits in art form. Being born in the year of the rabbit is a contributing factor, but I also find the concept of the moon rabbit / Jade rabbit a fascinating one. The idea that it's just pounding away at the mortar for its mistress, alone, isolated, and watching everyone else from far away.... it's something I relate to. That's just one of the reasons, perhaps I'll list more some other time. 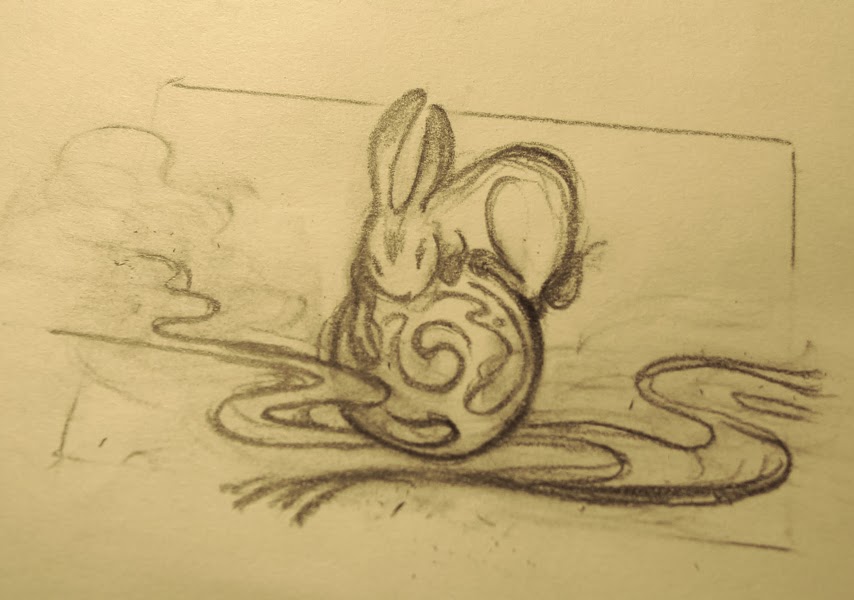 Shaded the back of the sketch with graphite and traced the pattern onto the rubber pad, and then redrew it with marker on the rubber pad. 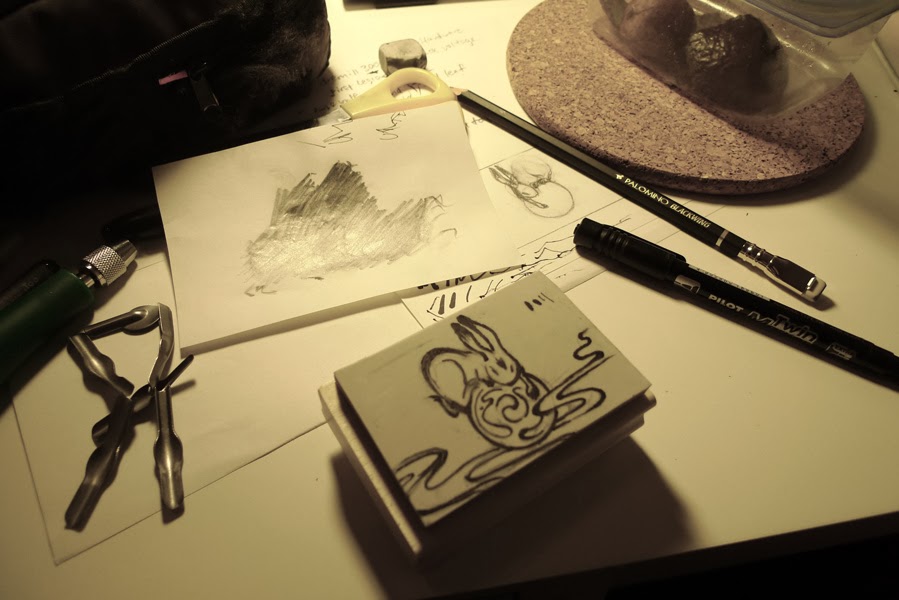 The carving step was challenging but relaxing at the same time - things that involve my hands are what makes me most happy these days, I find. I suppose it's the tangible, physical results that give the most satisfaction. 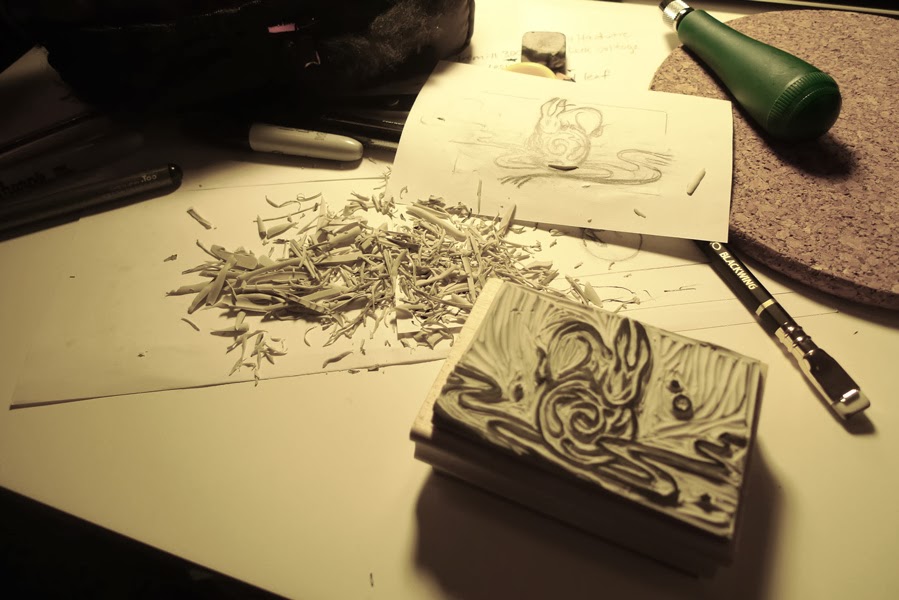 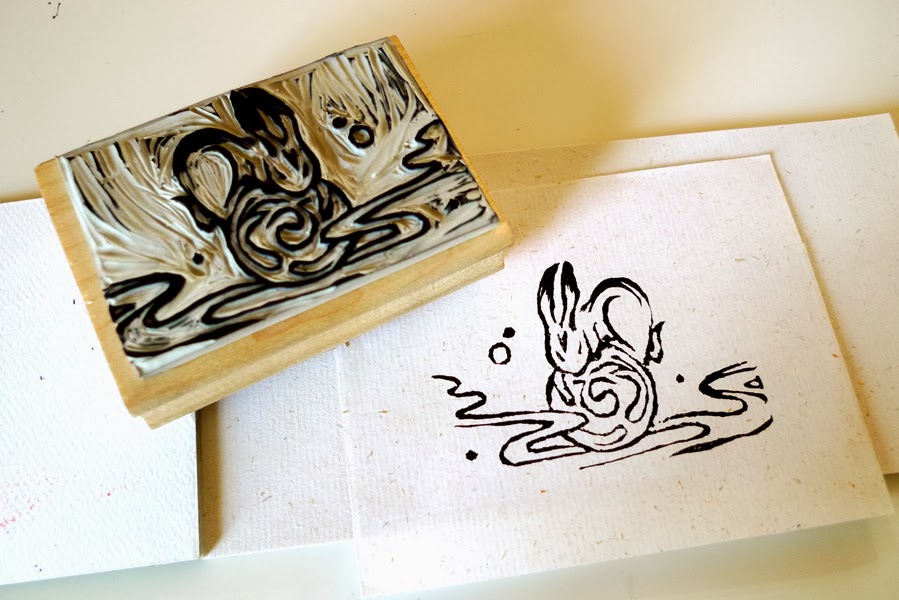 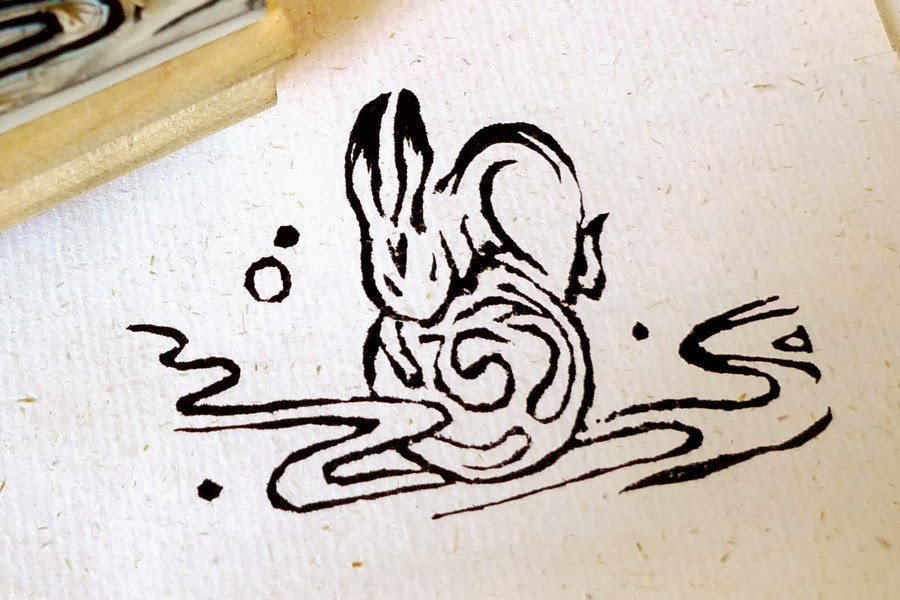 Yay! My first carved stamp. As always, I feel like the carving could be better, but it is what it is.
Posted by WuSH at 10:17 AM No comments:
Labels: ink, personal work, rabbits, stamps, tangible things

I didn't have any plans for this so-called special day, so I decided to romance myself with a simple meal and some sangria. Wanted to watch a movie... was trying to decide when I saw this picture thru Facebook, and I was like, "WHOA, that's TIGHT. I'm gonna watch it just because of that!"


Had no previous knowledge of what the film HER was about prior to watching it, but it was strangely appropriate with its theme of relationships, dealing with people and emotions in a world where a very quickly-evolving technology has become a huge essential part of everyday life, and the isolation that comes with it.

Left me with a heavy feeling for the rest of the night though. Still not sure if it was a good decision to have picked that movie for a Valentine's by myself.. might not have felt so glum if I had just stuck to watching an old episode of Running Man, but I think I've already caught up with all the old episodes, and didn't feel like watching a repeat, though it is always entertaining.

Made this fan art for TUNE earlier in the day, everyone should go check the comic out! Even better, buy the book! (so that the publisher will print the next book and we can read the rest of the story!) Super appealing art, great story with it just being the tip of the iceberg..

Was a little afraid that I wouldn't do the characters justice, but got a really warm response from Derek Kirk Kim, the comic's creator. :> 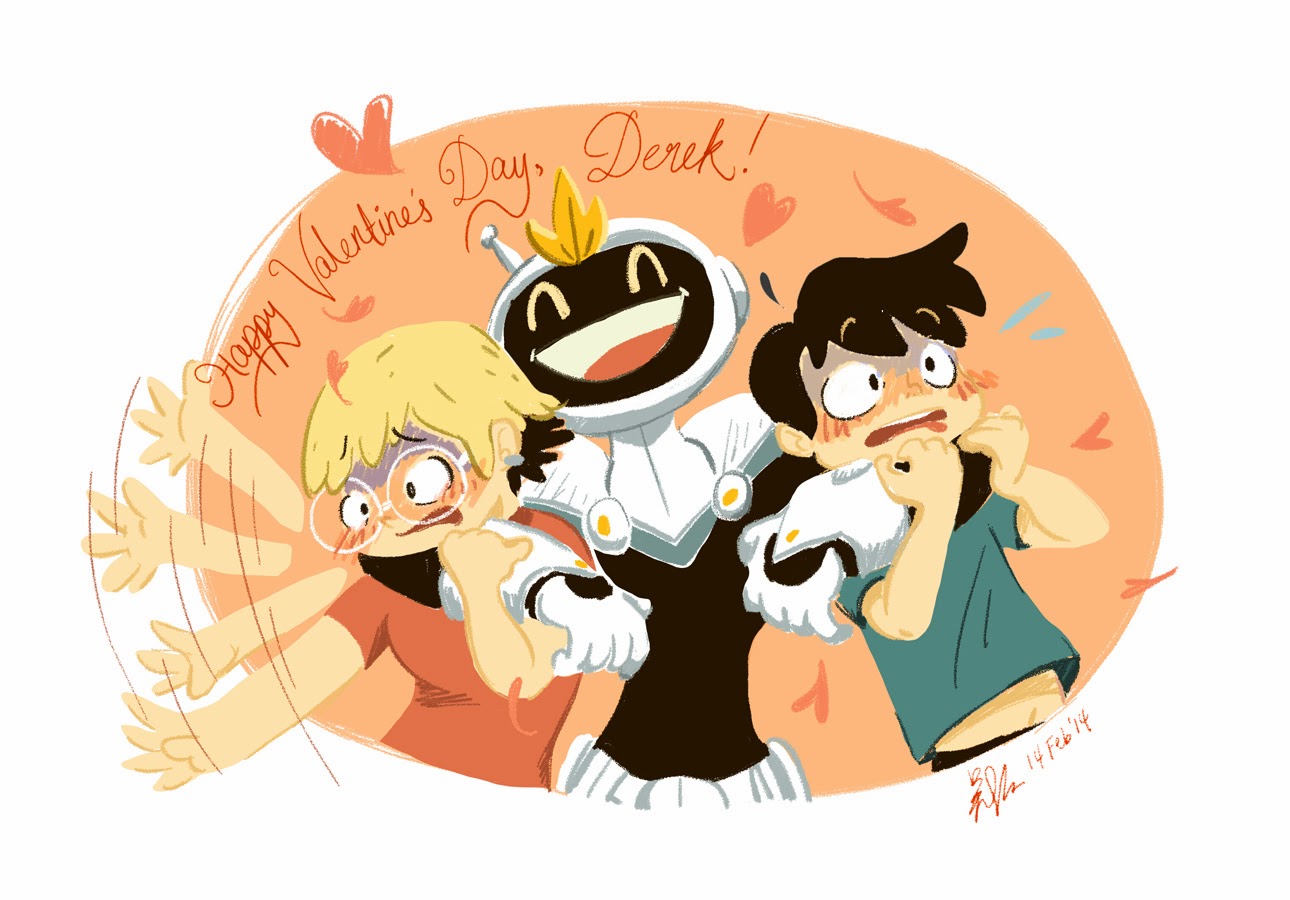 I've always admired his work from way back, when Same Difference was available online. Even bought the FLIGHT comics because he was one of the artists, alongside Jen Wang , Vera Brosgol and tons of other talents. Lost track for a while when I started school at Ringling though, with work and all that. But rediscovered his booth at APE 2013 (Alternate Press Expo) in San Fran! So glad that I went! There were tons of other awesome artists there too, but that was the highlight for me.

Glad to have met him in person. Only regret is forgetting to take a photo with him there. We did share a solid hi-five though! :D AWWWWW YEEAAAAHHH~!
Posted by WuSH at 2:42 PM No comments:
Labels: fanart, movie review, thoughts

Like picking up an abandoned half-filled sketchbook, I'm going to try filling in the pages again.
Perhaps it's the lack of human interaction I've had since graduation, but I need an outlet for some thoughts and Facebook is too open and over-whelming... I never did like going mainstream.

So while this will contain some art, it's also going to have some personal ramblings and places I get my inspiration from (probably more of that than actual artwork).

Like I mentioned in the first tumblr post about doing something that needed a little more guts personally every Valentine's (I got my ear piercings on those days)... this is this year's V-day piercings: to open myself to the Net. 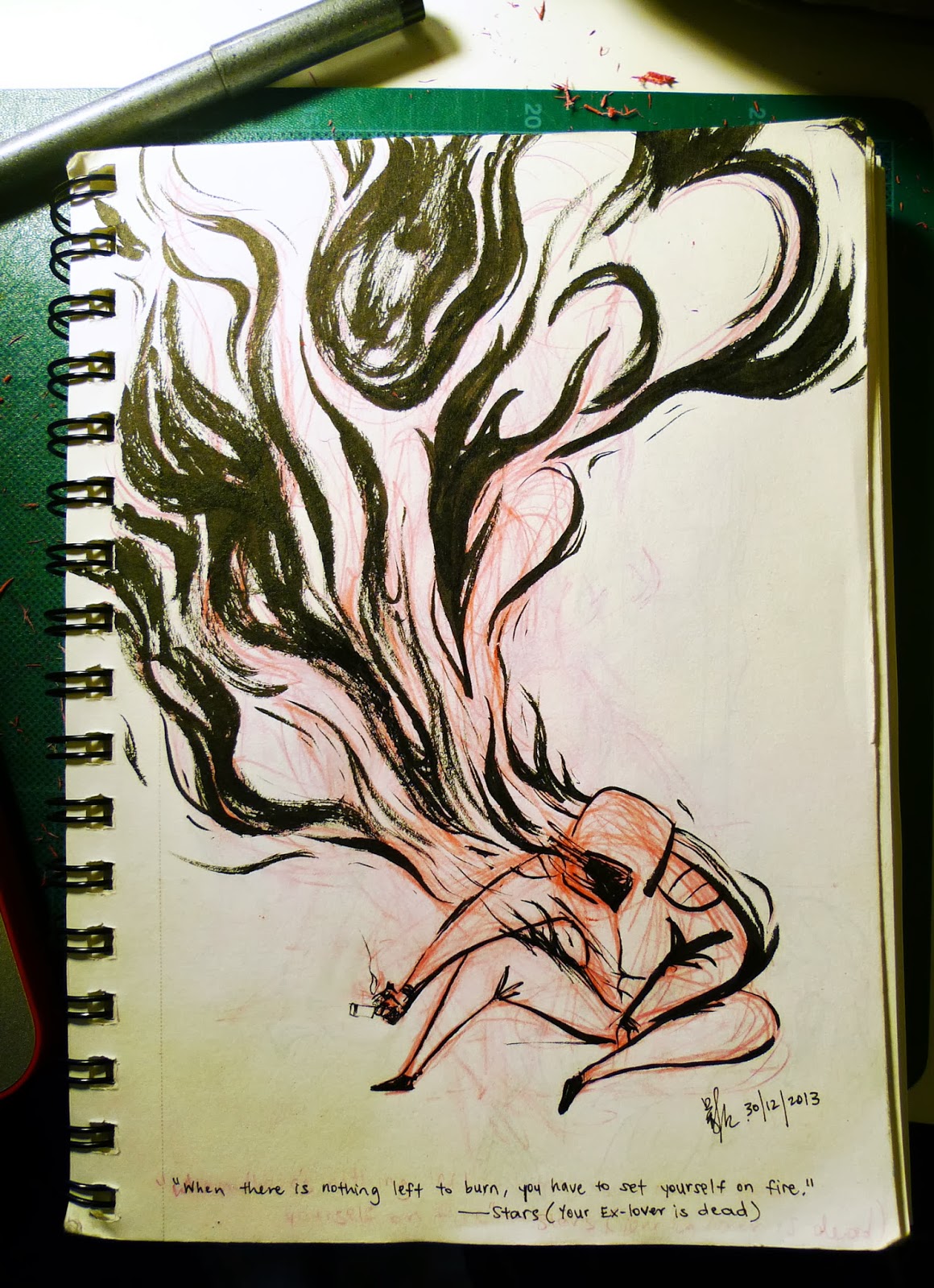 Maybe what has been holding me back was my mindset of, "If I post something, it should be POSITIVE, and HAPPY, and CLEAN, and FUNNY..."
But I can't pretend / disillusion myself any longer that the things I make are any of that. It's all emo-shit.
It's not Disney that shapes my life. 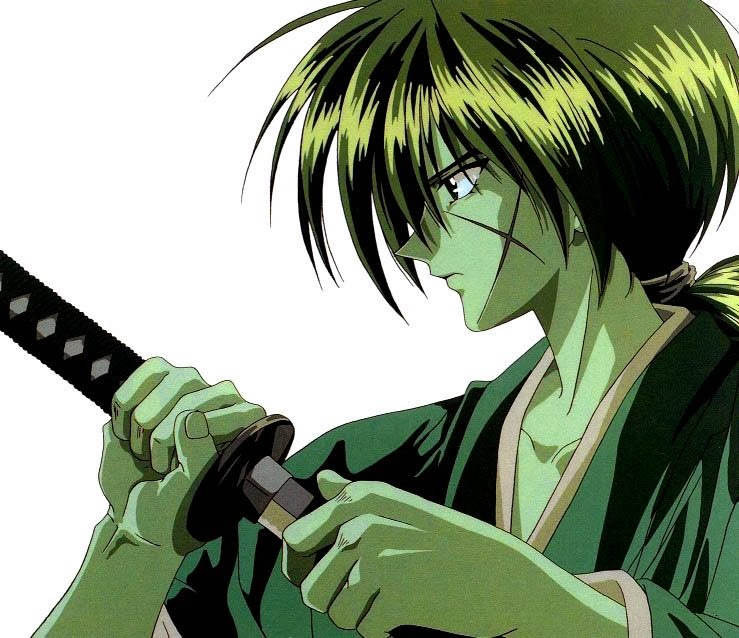 It's stuff like MindGame, Samurai X, and Miyazaki films, among many others, with the grittier themes that have had a heavy influence on me. Was never good at creating intentionally funny things from the start. I've come to realize though, I'm not the only one and a lot of the art out there that inspires me are like that. I guess it's not too bad of a thing.

So here we go.
Posted by WuSH at 12:21 PM No comments:
Labels: ink, sketches, thoughts

and an exaggerated one..

then we worked on a pantomime.. at first the character was a soldier.. but well, the story makes him more like a thief.. 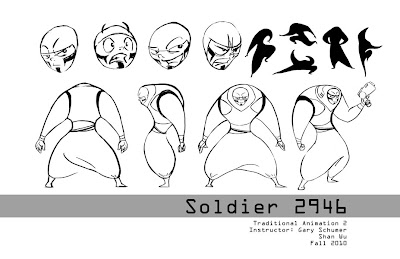 I know... too fast.. timing still needs alot of work.

Lip sync! man.. thank you to my friend Yoav for giving me so much video reference, and to Kevin Herron too. 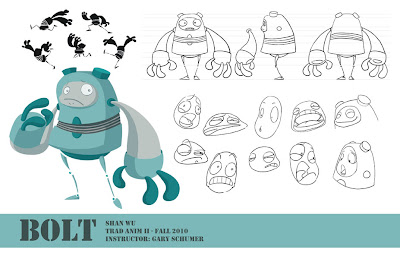 finally... dance sequence! woo hoo! took me a while to decide what actions to do.. so many ideas including fire breathing which I really wanted to do, but due to time limit for both work and the clip itself, unable to add fire... maaaybe someday?!?

perhaps will upload the compiled one later, because it's cool to watch everyone's awesome work in one clip :)
Posted by WuSH at 10:03 PM 2 comments:
Labels: 2010 Fall, animation, school work 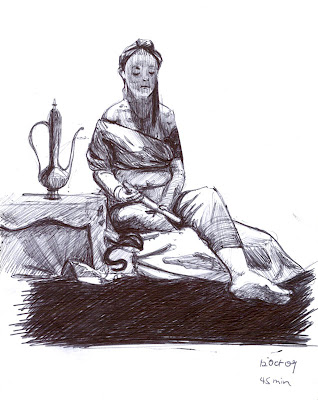 ahh... it's been too long since I've updated.. an attempt to clear a backlog of things I've been wanting to post for a while now. like the sketch above.... such an old piece.

anyways, just a couple of pages from my old sketchbook..

these were done during the winter break in New York.. mostly on the subway. 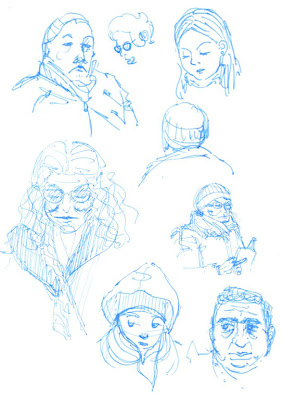 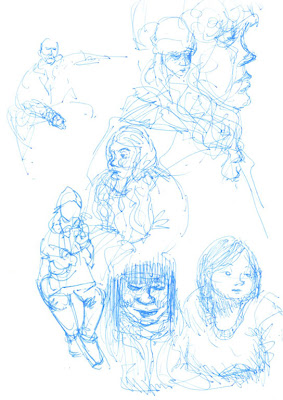 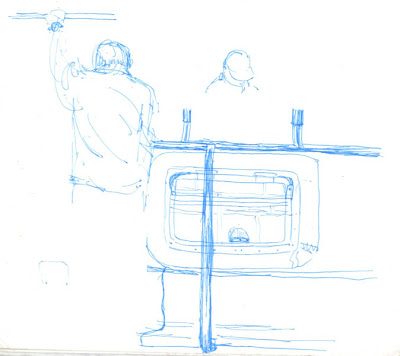 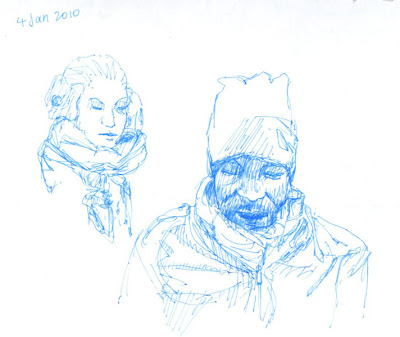 The rest of the sketches were done in Singapore... in the office, on the train, on the bus, here and there.... 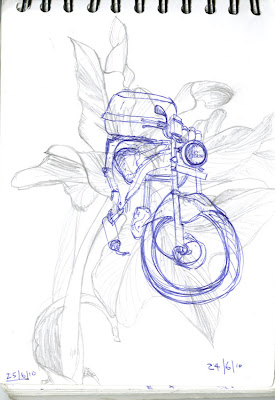 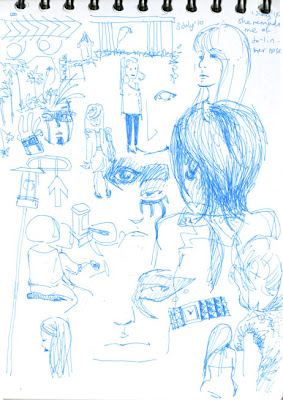 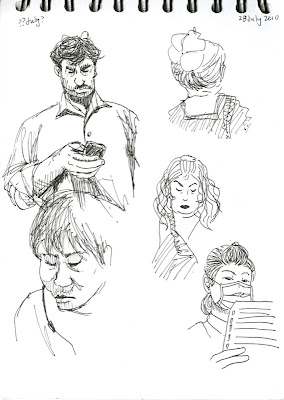 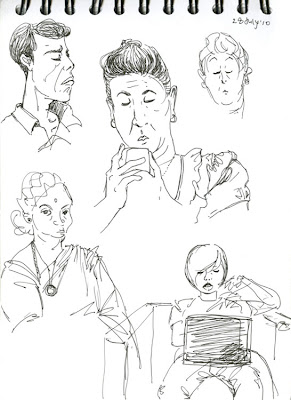 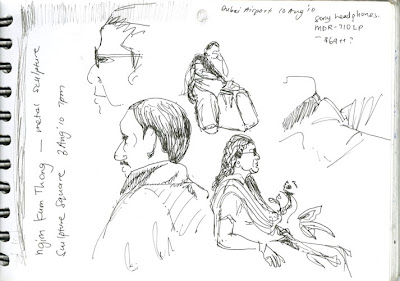 Not exactly an update... too many things half-done =__=
will post once I've compiled it..
but here's an inspiration! AAHHH! SO AWESOME.

WuSH
They call me Wu Shan, or Shan Wu, which ever way you prefer it. Born & raised in Singapore, graduated from Ringling College of Art & Design. Now trying to figure out life.

wu-sha-no-va
noun
The culmination of Wush's thoughts, resulting in an explosion of rambled nonsense in a comprehensible form